Our guest blogger Tom Buncle is Managing Director of Yellow Railroad Ltd., an international destination consultancy that helps countries, cities and regions worldwide improve their competitiveness as tourism destinations. He has worked for clients in the UK, Europe, Africa, Middle East, North America and the Caribbean. Tom is a former Chief Executive of Visit Scotland, Honorary Professor at Edinburgh’s Heriot Watt University, and author of the global ‘user’s manual’ on destination branding, Handbook on Tourism Destination Branding, published by the United Nations World Tourism Organization (UNWTO). Tom’s motto: “Life is not a dress-rehearsal”…………..so employ experts to help you get it right first time!

“The very places they patronize are destroyed by their affection” (Tahir Shah, House of the Tiger King: The Quest for a Lost City) 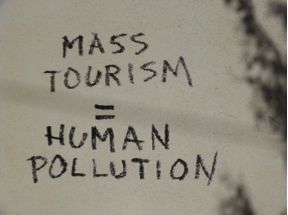 Are we reaching 'Peak Tourism'?

Stories of tourism congestion and images of anti-tourism graffiti in places like Barcelona, Amsterdam and Venice grabbed European media headlines last year as never before.

Is this just a case of media sensationalism? Or is it the canary in the mine of the global visitor economy, warning of impending disaster? On closer investigation, the situation is, as ever, more complex than media headlines would suggest. The truth is many destinations need fewer visitors in the peak season and more in the off-season. There are two sides to this coin.

Nevertheless, the dream is disappearing for many visitors and the nightmare beginning for many destinations. The 'sharing economy' is becoming more about sharing less and less space with more and more people than any romantic notion of "what's mine is yours". Visiting the Sistine Chapel has become an exercise in self-preservation rather than artistic reflection; that backstreet cafe 'only the locals know about' is a fantasy; and, as for that idyllic deserted beach, forget about it. Of course, there are exceptions. But the question is: “Are we reaching peak tourism?”

The answer varies from country to country, place to place, and season to season. But peak season congestion in many tourism hotspots worldwide is threatening to destroy not just the visitor experience, but also the natural and cultural environment. So, is there still time to live up to the United Nations World Tourism Organization’s laudable aim of developing sustainable tourism around the globe?

Putting a Finger in the Dyke

Destinations are waking up to this issue for three reasons:

• Residents are becoming increasingly fed up with the impact of what they see as tourism congestion on their daily lives;

• The very thing that attracts visitors – the natural environment and built heritage – risks being irreparably damaged;

• If the visitor experience becomes intolerable, they will stay away, thus hitting the destination’s economy.

So, how are destinations responding?

Barcelona has placed a moratorium on new hotel building; Amsterdam is questioning whether it should halt promotion of the city; Venice is struggling to respond to residents clamouring to reclaim their ‘streets’; Bermuda, Mallorca and Ibiza have put a cap on hotel beds; Antarctica, the Galapagos and Dubrovnik have limited cruise ships; Machu Picchu has introduced a new permit system; Cambodia banned cars from Angkor Wat last year; Italy’s achingly picturesque Cinque Terre coastal villages have introduced a daily visitor quota; Florence’s Uffizi Gallery has introduced timed differential pricing to spread visitors; many attractions, sites and parks have put a limit on the number of visitors per day or year – from Beijing’s Forbidden City and New Zealand’s ‘Lord of the Rings’ Hobbiton village to Canadian National Parks; and, worldwide, countries and cities are toying with introducing or increasing tourism taxes. Cities, such as London, Paris, San Francisco and Reykjavik, have imposed a limit on short-term rental of entire houses and apartments (between 60 – 120 days), largely as a result of the success of platforms such as Airbnb. Nevertheless, 90 days still seems generous in a city like Reykjavik, where there is only one hotel room for every five visitors to the country and the informal rental market has distorted the property market, pricing local people out of homes.

Springing the Goose from Death Row

This is not a diatribe against the tourism sector – far from it. It is a plea to encourage governments, local authorities, national tourism offices (NTOs) and destination management organisations (DMOs) to think harder and plan more strategically, so that they do not kill the goose that lays the golden egg...........so that tourism can truly benefit their economy, reduce poverty, create jobs, enhance conservation, inspire tolerance, keep communities together, and underpin peace in troubled countries, as so many of us have preached for so long. Tourism can be a force for good, not least in developing economies. But, if not managed properly, it can be destructive of the natural environment, of cultural heritage, of host communities, and of residents’ goodwill.

So, what’s the solution? In a nutshell, it’s long-term sustainable planning.

On the one hand, a wide range of control mechanisms is available to destinations: from pricing, quotas and limits to regulations, licensing, and investment freezes. But these require political will and a textured understanding of the visitor economy by local or national authorities. It also means taking hard, and potentially unpopular, decisions, which put long-term sustainability above short-term political survival. This is not something that comes naturally to politicians; turkeys don’t vote for Christmas. Placing restrictions on business growth is seldom a vote winner, unless growth has reached crisis proportions, as in the poster children for ‘overtourism’ such as Venice, Barcelona and Amsterdam.

On the other hand, there are several facilitative measures NTOs and DMOs can undertake without political sanction. But for too long, NTOs and DMOs have played a numbers game, often driven by their political masters: volume (visitor numbers) is easier to understand than value (revenue from visitors); it makes for a better media soundbite.

In order to develop truly sustainable tourism, NTOs and DMOs should focus more consistently on:

• Spreading visitors throughout their country, thereby creating more jobs where they’re needed most;

• Attracting more visitors outside the main season, and thereby sustaining these jobs year-round;

• Targeting those visitors who will provide the greatest benefit to the destination, in terms of spend, length of stay, season of visit, propensity to travel beyond the ‘honeypots’, and, most importantly, their (responsible) behaviour in the destination.

Tourism ministries, NTOs and DMOs should also wake up to their broader responsibility and think about managing growth, not just creating it. Social media has supplanted some of an NTO’s promotional role. Third party, user-generated recommendations are driving interest in places previously known only to a curious few – from the Isle of Skye’s Fairy Pools to Iceland’s Sólheimasandur beach and Spain’s Caminito del Rey. This should free up resources to invest in managing growth, or at least in more nuanced marketing where it’s needed most – to drive growth off-peak.

Ideally, facilitative measures should go hand-in-hand with control mechanisms. Licensing, regulation, quotas and pricing can help moderate visitor flows to specific sites under pressure. But so too can better, more timely information, such as the helpful Cinque Terre app, which enables visitors to monitor traffic flows and check whether there is space for them that day. Such judicious combination of limiting access and empowering visitors to make their own decisions can both reduce congestion and improve profitability.

NTOs and DMOs can be smarter in using targeted, timely information to manage growth by time and place. The clever ones do. But more need to. Otherwise, “no vacancy” signs might increasingly be replaced by “visitors not welcome” messages…..or worse. Barcelona is leading the way with anti-tourism graffiti – from “Tourists go home” to “Tourist: your luxury trip – my daily misery” messages. Even Amazon is selling “If it’s tourist season, why can’t we shoot them?” bumper stickers for $3.95.

Ultimately, this is a test of true partnership between DMOs/NTOs, local/national authorities and businesses. Never has such partnership been more necessary. A sound destination management plan (DMP) is essential to enable places to attract the type of tourism communities want, rather than countenance limitless growth driven by promiscuous marketing.

Putting 'Sustainable' back in 'Development'

More momentously, continuing unfettered growth risks releasing a widespread backlash against tourism, which could threaten economic development and, with it, people's jobs. We need to start paying more than lip service to the ‘sustainable’ part of sustainable development and insist on proper destination management planning.

The UNWTO showed admirable leadership when it nominated 2017 as the ‘International Year of Sustainable Tourism Development’. It’s time to call countries to account and ask what they’ve done differently this year in setting a path towards a more sustainable future for their destination. In short, it’s time to develop a strategy to protect tourism from itself. Otherwise we risk killing not just the clairvoyant canary, but the golden goose. Time may be running out for some destinations; but the real risk lies in there being even less political will than time. And, rather than playing a numbers game, we would do well, when planning our destination’s future, to ponder the words of Chinese philosopher, Lao Tzu: “He who knows that enough is enough will always have enough”.

Follow us on social media via the links below and discover all of our Travelations  here .

If you would like to speak to one of Tribe's travel experts, or would like to view our travel/tourism credentials, please email Elaine here .

Tribe Global is a network of over 30 independent agencies and business Partners working together with an overwhelming passion for solving client challenges creatively, with a commercial imperative. Travelations are for travel marketers seeking global perspective, actionable insights and business advantage. For more Travelations and examples of our deep Tribal travel/tourism experience, find us at tribeglobal.net.